Is a piano too big or too heavy? Is it too loud and it’s out of tune? None of that applies at all to the Roland GO: PIANO 88. Because it is easy to transport and, with a super low price, is aimed primarily at beginners. But is it suitable for learning the piano with it?

A look at the equipment should show whether it can tie in with the great success of the small GO: Piano. Designed as a small 61-key keyboard, the small GO: PIANO is a practical solution for everyone who doesn’t really have space for a full-blown piano. With 88 keys, the Roland GO: PIANO 88 is a bit larger, but it is still very handy. Above all, it’s pleasantly easy. In fact, that’s a big plus point for both GO: PIANOS. When it comes to mobility, the 88 model is also absolutely great. Differences in the small GO can be seen in the equipment with sounds. Here is the Roland GO: PIANO 88 designed in a minimalist way with its four sounds. If the 61 model offers around 50 sounds in comparison, the 88 can shine with a much more detailed piano sound. Clear and brilliant with sufficient resources for dynamically accentuated play.

The piano sound is quite similar to Roland’s smallest portable piano, the FP-10, but in this comparison, it does without some important details such as string resonance and damper resonance. Other sounds available are the e-piano, church organ and strings presets.

The keys play very smoothly, which should make the first steps easier for beginners. However, this is a simple keyboard that is more like a keyboard in terms of feel. Although the box-shape keys are in the shape of piano keys, they are somewhat shorter and, due to the lack of hammer action, do not allow an authentic piano touch.

Nevertheless, the keyboard feels nice and easy to grip. That makes the Roland GO: PIANO 88 also interesting for keyboard players who need a small stage piano for mobile use. Certainly not uninteresting in this context: thanks to battery operation, you can also play the piano independently of the mains.

Beginner piano to learn the piano?

The box shape keys can convey something like a piano feel, but they are more of a no-go for learning piano. If you are looking for a beginner’s digital piano to learn piano, then an instrument with a hammer action is more suitable.

Many functions and easy handling

The Roland GO: PIANO 88 has the most important digital piano functions on board, including a metronome and a transposer. The tuning and one of four dynamic curves can also be set. Two sounds can be played as a layered sound and there is a TWIN piano function for four-handed play.

A wireless audio connection from a smartphone, tablet, and computer via Bluetooth to the built-in speakers of the GO: 88 is very interesting for e-learning, for example. The Roland GO: PIANO 88 also cuts a fine figure as a MIDI master keyboard. The connection to external equipment can be established via USB or Bluetooth-MIDI. The learning functions in Roland’s Piano Partner app can also be used together with the GO: PIANO.

When it comes to the keyboard, you have to cut corners: the GO: 88 lacks a hammer mechanism for learning to play the piano with an authentic touch. Those who place higher demands on a beginner’s digital piano should definitely take a look at the Roland FP-10. In terms of price, it is only slightly higher than the GO: PIANO 88 and represents an immense improvement in terms of keyboard and piano sound.

With the Roland GO: PIANO 88, mobility is clearly in the foreground: At just seven kilograms, it is an absolute lightweight among portable pianos. Despite its plastic housing, it is robust and easy to stow away. Ideal for everyone who doesn’t really have space for a piano.

The GO: PIANO 88 is an inexpensive and flexible solution both as a small beginner piano or as a light stage piano and MIDI master keyboard. The connection to external music equipment via Bluetooth or USB-MIDI is great, with the metronome, transposer and TWIN piano the most important functions are on board.

Sympathetic resonance is an important sound element in any piano sound. These are resonances that arise between overtone-related tones, hence the term “sympathetic”. What is created in the acoustic piano by the interaction of strings and dampers has to be artificially created in the digital piano.

String resonances are formed in a complex way

Resonances that are directly related to the damper pedal (sustain) are often also called damper resonance in digital pianos. All strings can vibrate freely. In the case of an acoustic grand piano or upright piano, there is again the effect that the strings of only a single struck note (played without a holding pedal) are stimulated to resonate by other notes. In which way and how strongly a string resonates, basically depends on whether the notes played match the overtone spectrum of the unmuted string. This harmonic-dependent interaction is used in digital pianos with terms such as  Sympathetic Resonance  ( Roland Piano Designer ),  String Resonance  ( KAWAI Virtual Technician), or  Virtual Resonance Modeling (VRM, Yamaha Piano Room / Smart Pianist ).

There are always resonances whose overtones are related to each other. As a sound-forming element, this has an influence even if, for example, you only play two voices. These resonance effects are much more subtle than the damper resonance when the sustain pedal is depressed. Nevertheless, they are an important part of the harmony of played tone sequences and chords. The relationship between overtones results in complex relationships that dynamically influence the sound of an acoustic grand piano.

The sound generation of modern digital pianos has quite authentic sounding simulations of the sympathetic resonance. In addition, sound behavior can even be adjusted individually. With some digital pianos, string resonances are generated with special samples, while other systems use physical modeling technology. 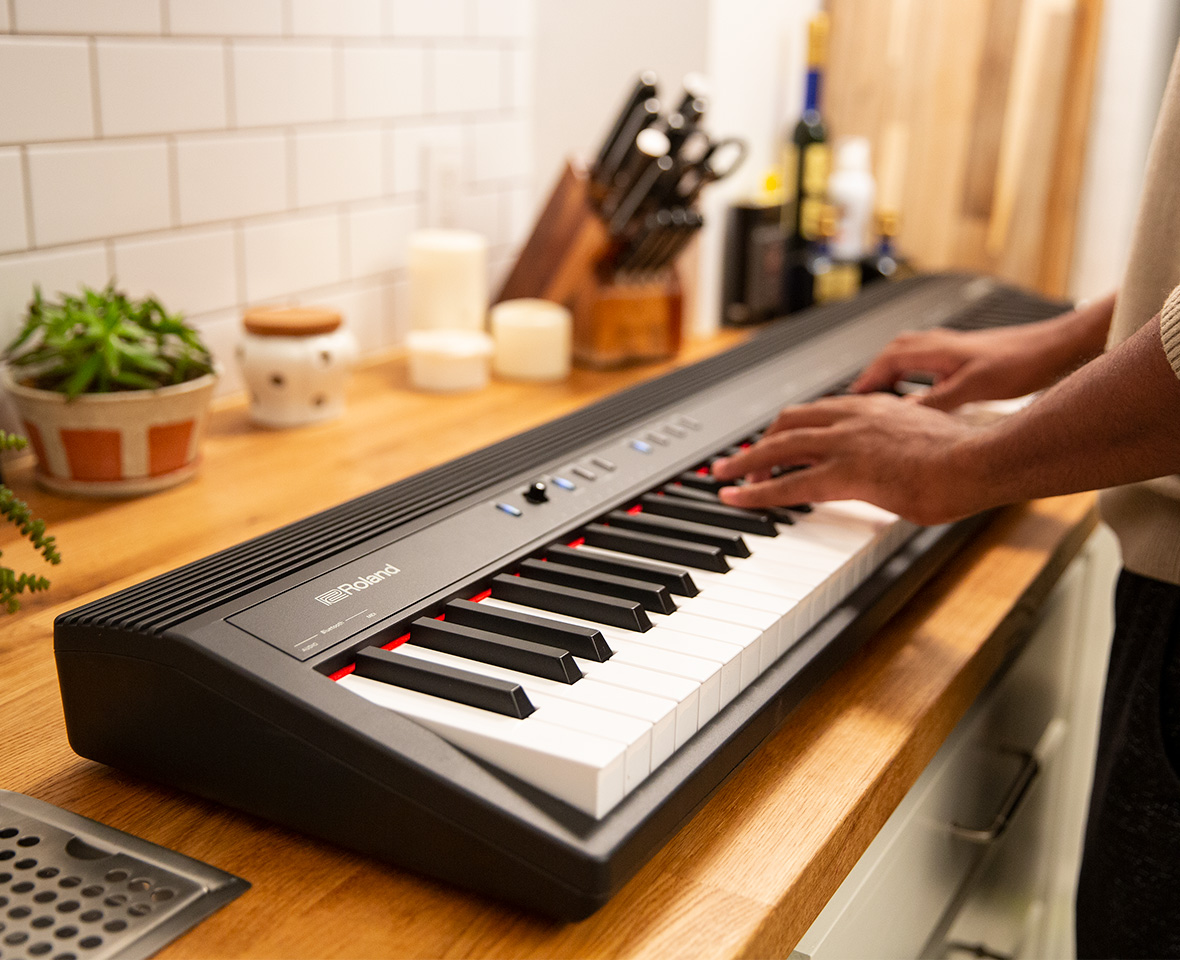 How can you make the sympathetic resonance audible?

You can easily find out the relationships between the string resonances yourself. Play a key very softly or mute and hold it down. Now briefly play notes that match this root note (staccato). You can see that these idle strings reflect the corresponding overtones as resonance. So if you hold the C as shown in the picture and briefly play the G, the G continues to oscillate as an overtone in the C held.

What influence do string resonances have on piano playing together?

The example above is only for illustration, but you can even work with the overtones in a tonal way if you want to. In modern piano literature, there are even playing instructions that contain the silent allusion of notes and chords so that these notes – now freed from the damping – function as harmonic resonators for the notes played on the other hand.

Even when a note is struck, the whole thing has an impact on the sound, as the overtone content changes over time – depending on which other notes are played in context, e.g. in two-part melodies with held notes. If you play the C tonally as in the example above, tones in the melodic course of the second voice will produce resonances in the decaying tone. Digital pianos, which cannot reproduce string resonances in detail, are missing an immensely important component for liveliness and sonority.

Damper resonance occurs when playing, as long as all dampers lift off the strings. This type of string resonance is popular because of the filling overall sound with lots of atmospheres. You can hardly escape the magic of this complex reverberation effect.

String resonance in the forte pedal

As long as the pedal is depressed, all of the piano’s strings can vibrate freely. If you play a single note now, it is enriched by the resonance of neighboring and related strings. The result is a rich tone with a kind of reverberation effect, which can also combine a sequence of tones in a harmonious way. The strongest resonances arise with tones whose overtone structures harmonize with one another. If you play a middle C, this tone swings in the strings of other octave registers, but other tones of the natural overtone series are also gently stimulated, such as the excessive fifth and the major third two octaves higher.

The reverberation controlled by the damper pedal increases the more notes you play while holding the pedal. If this pedal effect is not applied, all the tones are blurred into a sound pulp. But if you know how to use damper resonance in a targeted manner, you can conjure up great sounds with the pedal. There are several ways to combine notes with the forte pedal. You can hear the difference in the harmony immediately if you either play two consecutive notes directly into the pedal that is held or only press the pedal after the first note and then bind to the second note.

The use of the damper pedal is precisely recorded in many piano scores, but in some cases, it is a matter of taste whether and how you use the pedal. The damper pedal is a popular stylistic device for tying chord accompaniments. At the same time, you can give harmonies, riffs, and decorations more “space” in this way.

The dosage of the pedal effect is always important, so playing the pedal requires a little practice. As a small rule of thumb: With every noticeable change in harmony, you should briefly remove the pedal, then press it again with the new harmony.

The intensity of the damper resonance can be adjusted on many digital pianos: Kawai Virtual Technician, Roland Piano Designer, Yamaha Virtual Piano Room.