Today, we bring you the Casio Privia PX-780 review. The PX-780 is the successor to the PX-750. As you’ve read in the title, the PX-780 is part of the popular Privia series of digital pianos and has a cabinet-style design. It was released in March 2013 after being introduced at the Winter NAMM (National Association of Music Merchants) 2013 in January. 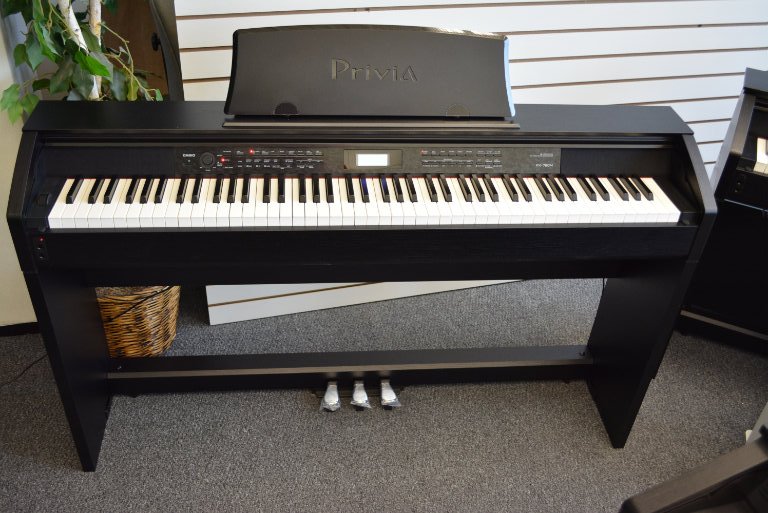 According to Casio, “the new PX-780 represents a significant step in the continuing evolution of the Privia digital piano line. A combination of new keyboard action and a powerful new sound engine provide a new level of detail, nuance, and expression for a superior grand piano experience in the lightweight and stylish design that Privia is known for.”

The Privia PX-780 has appeared in our last two monthly best-sellers list. It certainly is gaining popularity. The reviews from critics are positive, too. Based on our experience with the Casio PX-780, it’s safe to say that it’s got great value and remarkable quality. Before you go on to read the rest of this review, we want you to know upfront that we are not just recommending it, but highly recommending this instrument! That’s how great it is.  We believe it would still be of great value if it was priced higher. 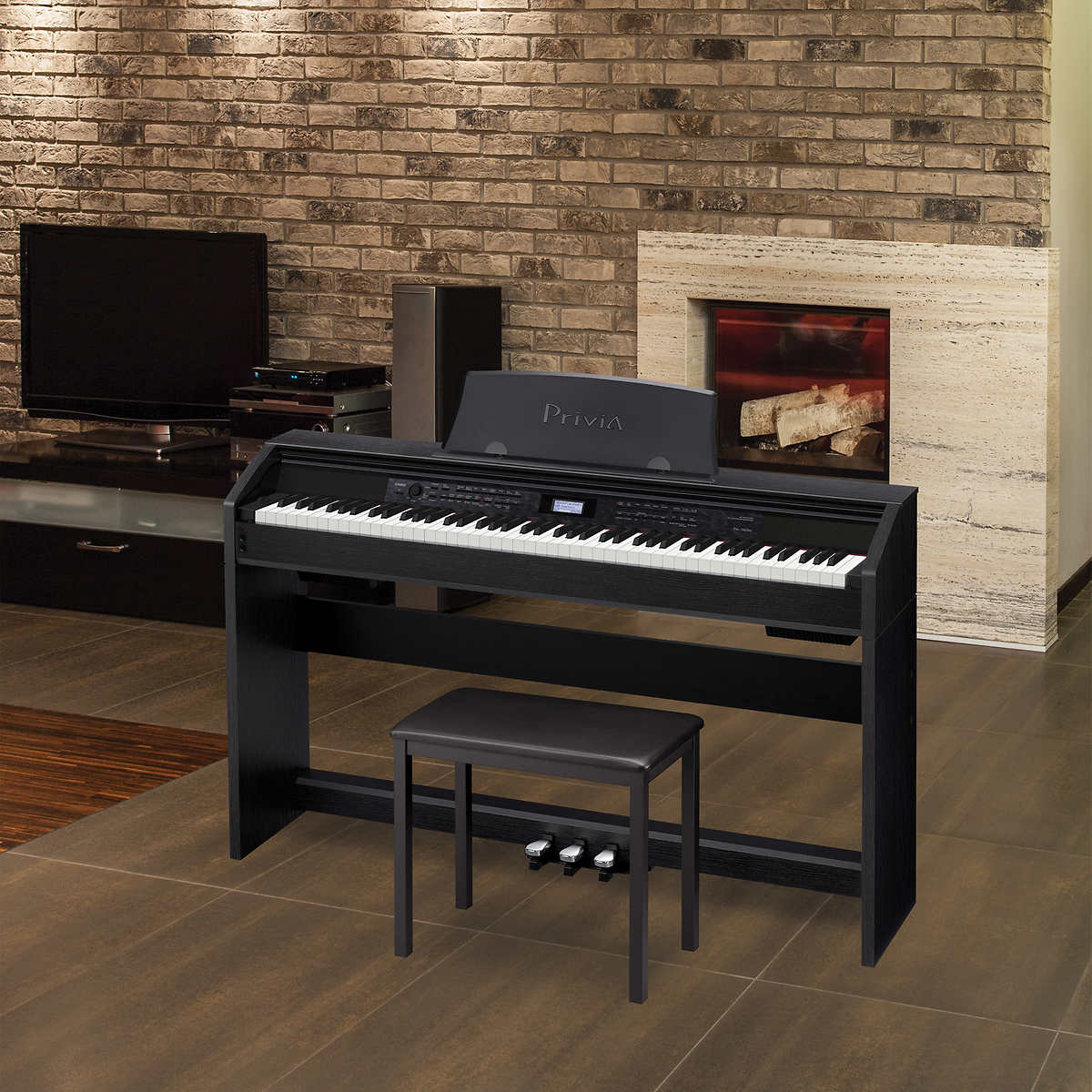 Let’s take a look at the features before going into the pros and cons: 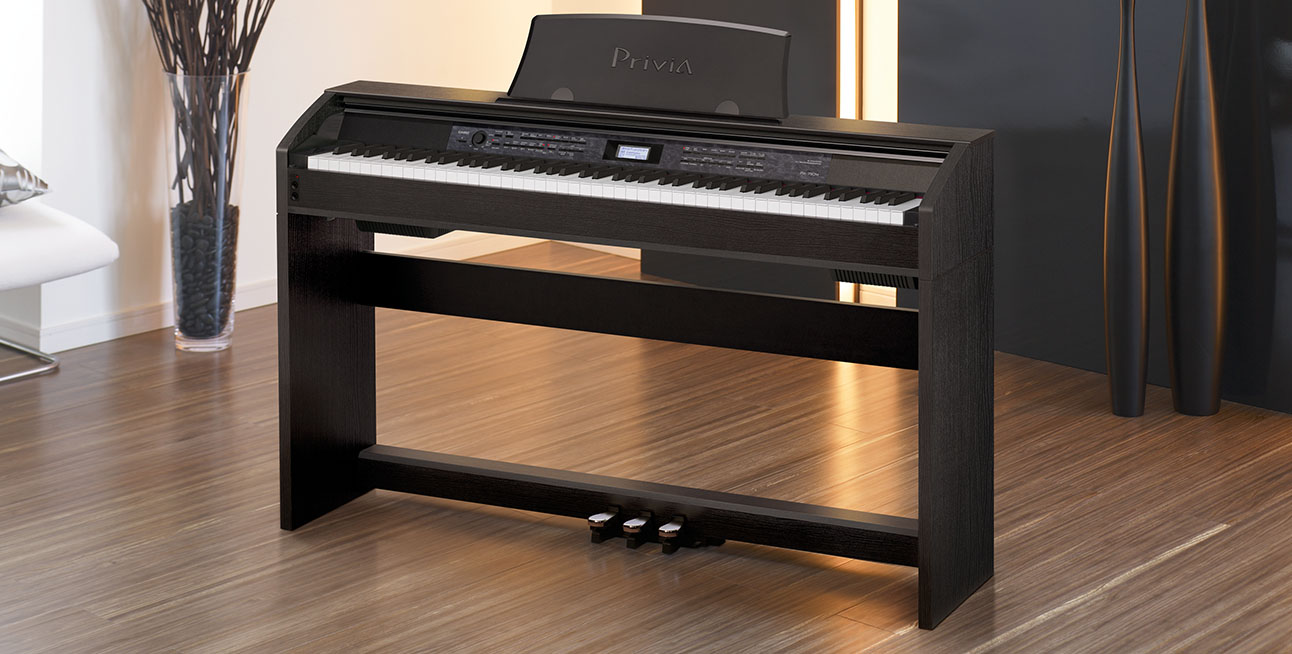 Thanks to the dynamic AiR Sound Source (something you don’t get in Yamaha models), and the improved Scaled Hammer Action Tri-Sensor Keyboard II, the feel and the sound of this digital piano is as close as you can get to an acoustic piano.
The upgraded AiR sound source uses 3 times the memory compared to its predecessor. If you blindfold yourself and played the PX-780 and an acoustic piano, you will have trouble telling the difference.
Casio’s tri-sensor that is added to the already great weighted keys, making it fun to play this instrument. The keys respond well regardless of your playing style.
On top of the excellent sound quality and the touch response, the physical look and feel of the keys is of better-quality as well. The keytops have synthetic ivory and ebony surface. The result is a smoother finger movement when playing.
The built-in speakers are great but not as great as the ones on the pricier (insert a link to) PX-850.
Consider its affordable price, you get a ton of built-in instrument tones. How many you might ask? 250! Nope, that’s not an extra zero. There are expensive digital pianos out there with a fraction of 250 tones. With the PX-780, you get 250 tones.
Additionally, this model also comes with 180 built-in rhythms. These are added bonuses that will benefit various musicians. And there are so many more extras all of which are quite notable.
With a built-in metronome, duet mode, and split/layer, it’s great for new learners. And there are also 2 headphone outputs that can be used when two individuals want to play simultaneously. Although these features-for-learners are getting common, they are still an advantage worth mentioning here.
The built-in backlit LCD display is easy on the eyes.
Variety of connectivity capabilities (USB, MIDI, Line In/Out, iPad connectivity, etc.) making it live easier when you need to compose music and transfer files back and forth.
Looks decent, and has a sliding keyboard cover for protection against dust and spills or any other “danger” to the keys. As you can tell from what you have read so far, we love the Privia PX-780.  Roland and Yamaha models. Casio has definitely upped their game. It was only released earlier this year, yet it has gained popularity fairly quickly.

Good for: both new learners and experienced pianists on budget, but want exceptional quality

Not so good for: highly experienced musicians and those who frequently play at gigs it’s not really portable due to its cabinet style design

The two Casio PX-770 and PX-870 hardly differ in appearance from each other: They both have a pull-out keyboard cover and are rather gracefully designed. The only external differences are the slightly different music stands and the large cover – affectionately known as the “privacy panel” in English – which makes the PX-870 look more like a piano and less like a stage piano. With dimensions of only 30 cm deep and 80 cm high, both instruments also fit in homes where space and space-saving play a major role. Like all digital pianos and their acoustic brothers and sisters, they are 1.40 m wide and thus have the full range of 88 full-fledged keys. The white keys with 15 cm and the black keys with 10 cm also meet the usual requirements in terms of depth,

Compared to the previous versions, the small operating section is no longer in front of the player, but to the left of the keyboard. This means that the player sees the keyboard in front of him, followed by the notes immediately afterward because the Privia series does not have a stem-like that of an acoustic piano. This has the advantage that the digital pianos are built very slim and low but also has the disadvantage that the notes are relatively low. This in turn means that there is no storage space for sheet music on the digital piano.

The operating section is only a few square centimeters in size and has a couple of elongated buttons and small LEDs. Unfortunately, there is no display, and feedback on the settings is only answered by the digital piano with beeps – long, short, once, or several times. This is impractical and takes some getting used to because even a simple, three-digit LC display can be much more useful.

The headphone jacks – there are two of them each – are both on the front left under the keyboard. You have to climb a little under the gaming table, but they don’t bother you either. Incidentally, under the gaming table, there are also the speakers, which with 2 x 8 watts and 2 x 20 watts are definitely sufficient for playing at home and also in a duo. Then the music stands on the console and, on the PX-870, an additional bar for the speakers.

The two devices we tested were black in color and simulated a wood veneer. The structure of the stand was very reminiscent of a Swedish furniture store, both in terms of the type of structure and the materials used: rather thin chipboard and plastic. Sagging privacy screens reveal the desire for weight and price savings. Unfortunately, the assembly instructions only consisted of an exploded view, lots of numbers, and even more dashed lines, which can certainly be made even better. Once assembled, everything fulfills its purpose and is then stable enough for Liszt, Rachmaninoff, and Alkan.

Let’s take a look at the features: Both devices offer a weighted hammer action keyboard, split and layer function, chorus, reverb, three pedals, two headphone connections, a simple metronome and a USB to host connection, with which the digital pianos can be used as MIDI keyboards can use the computer. You can also tune and transpose both pianos. If you don’t always want to play at the same temperature, there are 17 other voice models such as B. Werckmeister, etc. to choose from. Furthermore, both digital pianos have a small sequencer with which you can record your playing.

Both Casio digital pianos are equipped with a number of practice pieces that can be played with either the right or left hand. That sounds sensible at first glance, but it will hardly play a role pedagogically because it is quite difficult to play to music without a rhythm section, especially when the recording does not wait like the piano teacher, but simply keeps playing stubbornly.

The Casio PX-870 not only offers these 60 piano pieces but also 10 tracks with full orchestral accompaniment. Here you can really let yourself go with the Moldau of Smetana or Pachelbel’s Canon – provided you manage to play with the orchestra because this time it doesn’t wait either.

Other differences between the Casio PX-870 and the Casio PX-770 are the doubled polyphony in the 870 (256 voices for the PX-870 to 128 voices for the PX-770), a few DSP effects such as string resonance, which the digital piano actually likes more makes a piano sound and a USB port for recording USB sticks. Here you can playback other recordings on the PX-870, for example, MIDI recordings from the network, as well as record your own recordings as MIDI files or even in wave format. 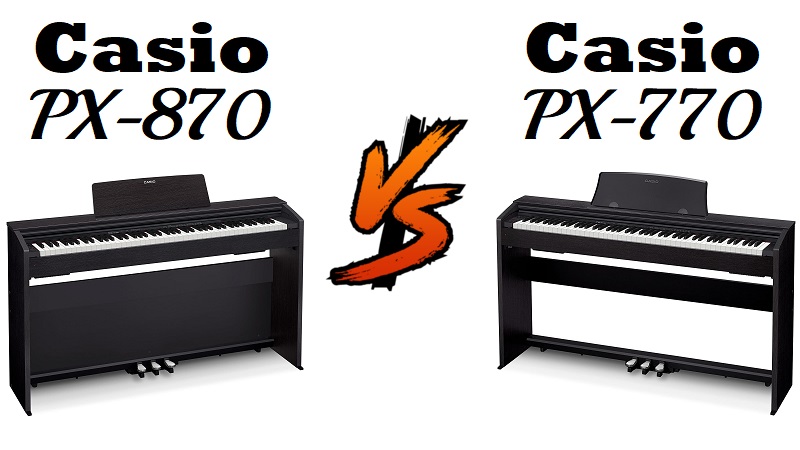 The two Casio digital pianos PX-770 and PX-870 of the Privia series differ from each other primarily in terms of sound: While the PX-770 sounds a bit like an older generation digital piano, the PX-870 can with the additional speakers and the refined DSP functions score points. The piano sound is slowly beginning to sound and to be fun, even if there is still no real enthusiasm. The keyboard is on a similar level, it is good and usable, but sometimes has a somewhat spongy appearance.