Casio has placed the “Slimline” model S350 from the Compact series significantly below the Privia PX-S3000 in terms of price. And yet it was precisely this big brother that was taken as a model for the alignment of the Casio CDP-S350. The result is a beginner piano with many features.

The CDP-S350 has inherited the slim design from its little brother, the CDP-S100, which follows a “pure piano” concept: With only ten sounds and an ascetic range of functions, the formula “grand piano sound and keyboard in good quality at a low price” are used . With the CDP-S350, which is barely heavier at 10.9 kilograms, Casio shows how many functions are available for just 150 euros more than its little brother: because it comes with 700 sounds, registrations, arpeggiator, automatic accompaniment, and MIDI song -Player and practice functions. 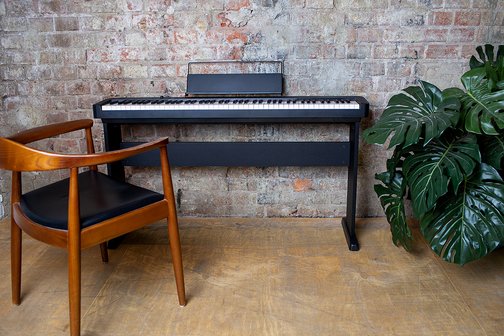 In terms of polyphony, it remains the same as on the CDP-S100: 64 voices are not a record, but absolutely okay for beginners. The built-in loudspeakers are a tad bigger than on the S100, each radiating 8 watts of power towards the rear. Absolutely clear: additional sounds and arrangements with drums, bass, etc. should come across well. Definitely good for the piano sounds, because they sound quite powerful through the small speakers.

If you want to connect the Casio CDP-350 to an external system on stage or in the rehearsal room, you have to use the headphone jack and a stereo mini-jack cable. The same type of audio input to which mobile players can be connected. A standard socket for a holding pedal and the three-pedal socket, as well as USB-to-host (PC / tablet) and USB-to-device (USB stick), complete the connection panel of the CDP-S350.

The CDP-S350 also comes with its little brother’s 88-key keyboard specially designed for the slim housing. The scaled hammer action with medium weighting provides a decent piano feeling. Matt key surfaces improve grip and the repetition of the keys is decent. The touch sensitivity of the keys can be adjusted using three dynamic curves. 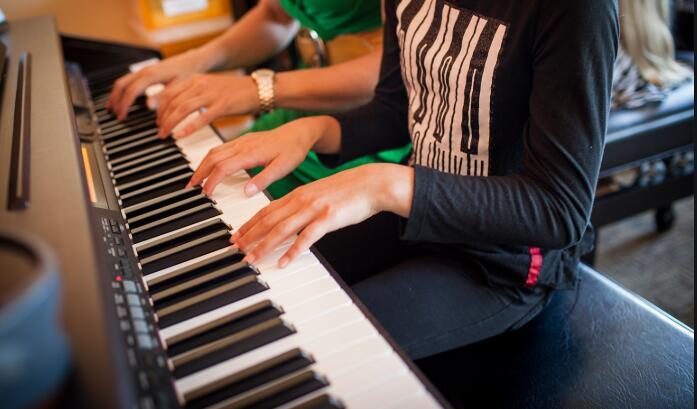 Casio has matched the sampled main sound of a concert grand piano well with the keyboard. In direct comparison with the one on the S100, this “grand piano” on the S350 looks a bit rounder and more elegant. Basically, the sound is balanced and has good dynamics. Compared to that of its big brother Casio PX-S3000, the loops start audibly earlier in the sustain phase, and there are not separate samples for all 88 keys. You also have to do without extras such as adjustable string resonances – bearable in view of the price. What is usually missing with the budget digital pianos, Casio does right with the CDP-S350. Because the sound categories essential for a portable piano such as grand piano, e-piano, organs, strings, and pads are varied. The “piano” bank alone is equipped with 28 sounds. In addition to the three grand pianos, there is also the powerful “stage piano” and sounds for pop, rock, and ragtime. Layers of piano and strings or pad are also included as well as multi-layered effect sounds such as “New Age Piano” or “Modulated Piano”. In addition, an E-Grand à la Yamaha CP-70 and useful harpsichord sounds. All attention!

And lots of additional sounds

The many multi-samples from the “E.Piano” group, which are good for this class of instruments: Fender-Rhodes, Wurlitzer, FM and other digital electric pianos in some variations. Clavinets as well as vibraphones and glockenspiel can also be found in this bank. 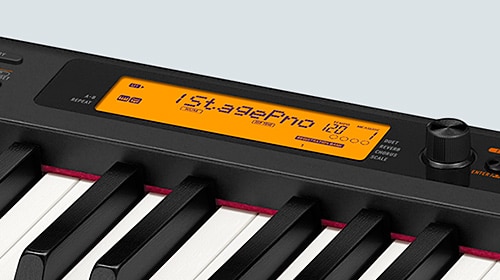 A lavishly staffed pipe and e-organ department, a very useful string, choir and brass bench with wood and brass, various synth pads and lead sounds continue the offer. It is true that in the CDP-S350 not every sound category and its sounds can match that of the acoustic and electric piano banks. But especially for the use of MIDI arrangements, a wealth of useful sounds is offered here, which is the exception in this price range.

The piano can manage three keyboard sounds because the split and layer functions can be used at the same time. The split point and the octaves for the lower and the two upper sounds can be set. Unfortunately, this does not apply to the volume ratios of these parts.

In addition to the two master effects Hall and Chorus with ten or five types, there is a DSP effect block. Its effects such as Phaser, Flanger, WahWah, Rotary or an amp simulation are always permanently assigned to certain preset sounds such as an electric piano or organ, so that there are no setting options here.

Pieces of music for learning included

152 MIDI songs were implanted in the Casio CDP-S350. In addition to evergreens such as When The Saints Go Marching In , Amazing Grance  or Greensleeves, there  are numerous classical piano pieces among them, in which you can play the voices of the right and left hands separately and thus take over the other ones yourself. Furthermore, freely definable song passages can be played in the loop for more intensive practice. The “Duet” function, which divides the keyboard into two independent areas, for students and teachers, for example, is also intended for practice. 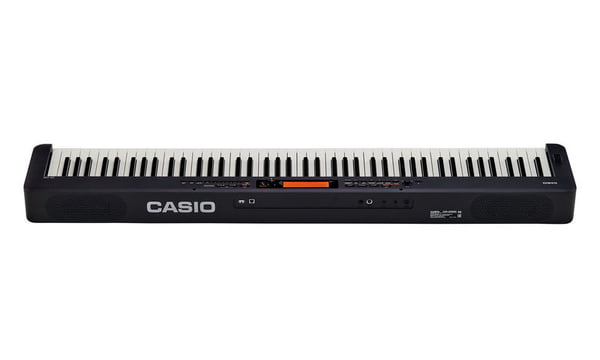 Save settings and functions

With the registrations, you have your favorite sounds ready at the push of a button. Arpeggios, rhythms and the automatic accompaniment settings as well as the three keyboard sounds with all associated parameters can be stored together in 32 registrations. The music preset and song areas remain outside, but the registrations are still a great thing, of course, even if the user is not allowed to give them any names they choose.

Operation on board and via the app

The fact that many people should find their way around the CDP-S350 intuitively is due to the well-implemented operating concept with rotary control and multifunction buttons. Scrolling through sounds or parameters and setting splits, layers, and the automatic accompaniment with ease and thus quickly having the next registration up your sleeve is even easier with Casio’s cheapest arranger piano than with its big brother PX-S3000 with its new touch surface. 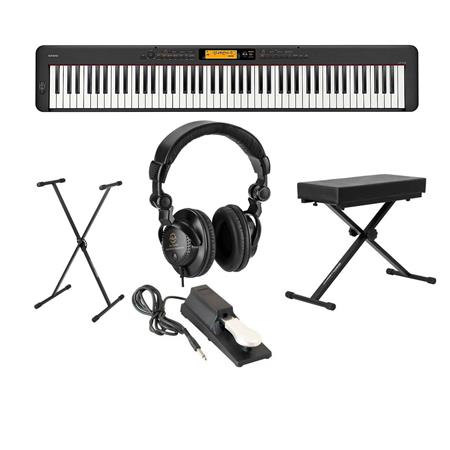 But the CDP-S350 is also supported by Casio’s free Chordana Play for Piano app for iOS and Android. Alternatively, all settings can be remotely controlled via a tablet connected via USB, and song player functions can be added in an even more elegant way. There is a notation display for the MIDI songs integrated in the piano. Audio songs, on the other hand, can be played back via the audio-in via the piano speakers.

Self-made MIDI songs from the relatively small internal memory can be saved on a docked USB stick so that there is space for new material internally. And MIDI files from other sources can also be played directly from the stick, just as registrations can be saved or reloaded on it.

A compact beginner’s piano for everyone who wants to have more playing fun thanks to more options. The CDP-S350 combines the good keyboard of its little brother CDP-S100 as well as slightly better grand piano sounds with almost the same wealth of sound and functions as its big brother PX-S3000 has to offer. Of course the PX model is on a different level, but as its “light version” the CDP-S350 undoubtedly cuts an excellent figure. If you are looking for a full-fledged arranger piano with good split and layer properties, you can’t go wrong with the S350 model at a price of around 500 euros.