A good keyboard and a good piano sound – especially beginners shouldn’t do without them. Like the smaller model in Yamaha’s entry-level class, the Yamaha Arius YDP-144 has a lot to offer – and is also inexpensive.

Playing fun is proportional to the quality of the keyboard and the sound – that has its price. The Yamaha YDP-144 clearly stands out from the cheap class: The Graded Hammer Standard keyboard has already proven itself in many other Yamaha instruments. The hammer action keyboard with graduated weighting plays accordingly well. 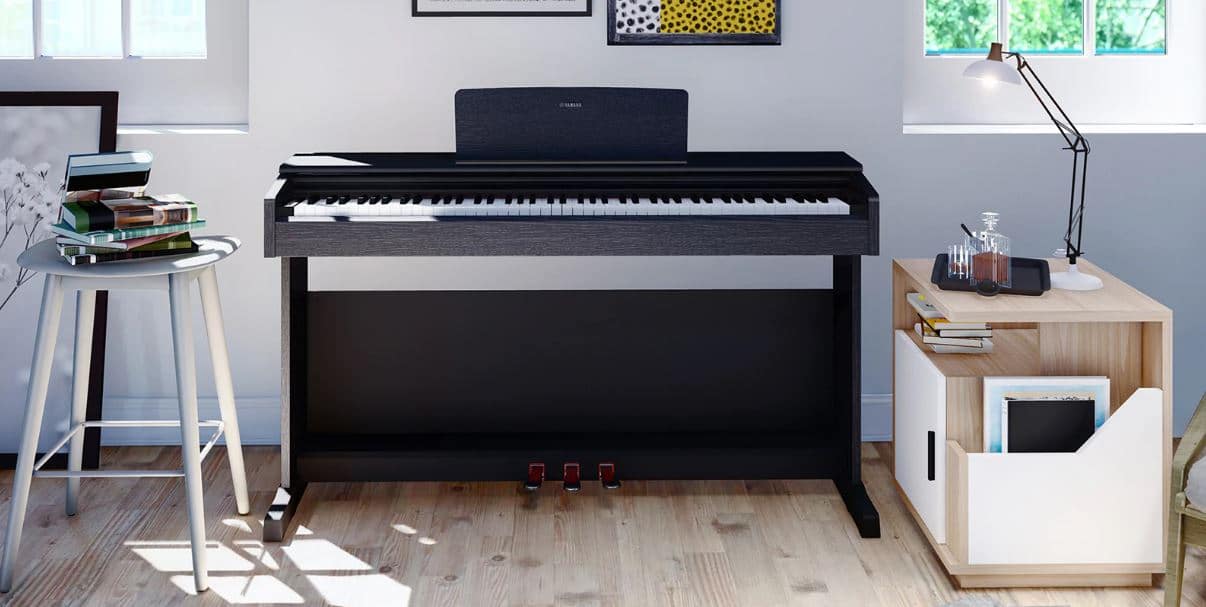 Judging by its features, the small piano can only be described as extremely cheap: a classic home piano design with top quality workmanship. And like the larger model YDP-164, even the small YDP-144 benefits from the technology of the current Clavinova series.

The Yamaha Arius series at a glance.

Compared to the previous model YDP-143, the differences are apparently small. In terms of sound, however, a lot has happened, because, with CFX piano sampling, the small YDP-144 enables the entry into the current Clavinova technology. A clear and full grand piano sound that can inspire in terms of dynamics and, last but not least, the wealth of details. With damper resonance, sympathetic resonance, key-off effect, and half-pedal (sustain), the piano sound realistically simulate the interaction of strings and dampers.

Speaker sound vs. a headphone

In order to experience the great piano sound in full, good headphones are recommended. It should be obvious that given the small size of the built-in speaker system, the concert hall in the living room is not to be expected. The playback options of the small speakers are limited with 2 x 8 watts of power, even if the IAC function certainly makes up for some of the sound volumes. Incidentally, the headphone sound is also enhanced by the Stereo Optimizer. 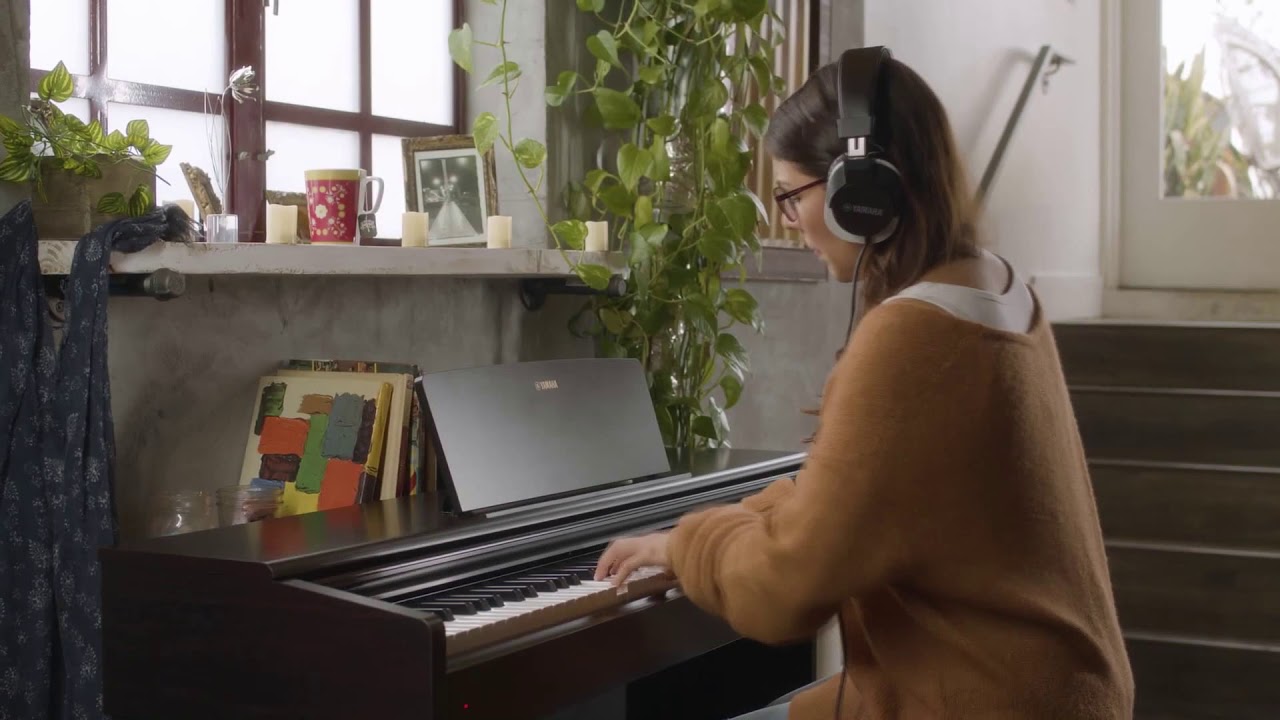 Whether metronome, recorder, transpose, tuning, DUAL and DUO mode, reverb or chorus effects – the YDP-144 has all the relevant functions on board that you need for playing, learning, and practicing the piano. The most important functions are easy to use. Many options can only be reached via certain keyboard combinations – nothing works without a manual. It is always amazing how many functions this little piano has to offer.

The Smart Pianist app, which Yamaha offers free of charge for iOS and Android devices, is more convenient.

Connect the Yamaha YDP-144 to a tablet or smartphone

With an integrated USB interface for MIDI and audio, the YDP-144 is optimally prepared for combination with a music computer, iPad & Co. Handling: child’s play! After connecting to the USB interface, the YDP-144 automatically logs into the operating system and may have to be set up once in the settings of a sequencer software or piano app, and you’re ready to go.

A practical feature of using USB devices is that MIDI and audio data are transmitted at the same time. This considerably simplifies the connection of any piano or music app – regardless of whether you want to make music with Yamaha’s own smart pianist app, other piano apps, or e-learning apps.

The Yamaha Arius YDP-144 in comparison

YDP-144 vs. YDP-164: The biggest differences concern the dimensions of the housing and speaker system and the features of the keyboard. If you want more in these details, you get significantly more with the YDP-164 for the difference of approx. The piano sound comes out of the smaller model without the smooth release, which beginners probably hardly miss. The fact that the piano sound cannot develop the tonal breadth here as with the YDP-164 is due to the smaller playback system. The headphone sound is almost identical in both models. 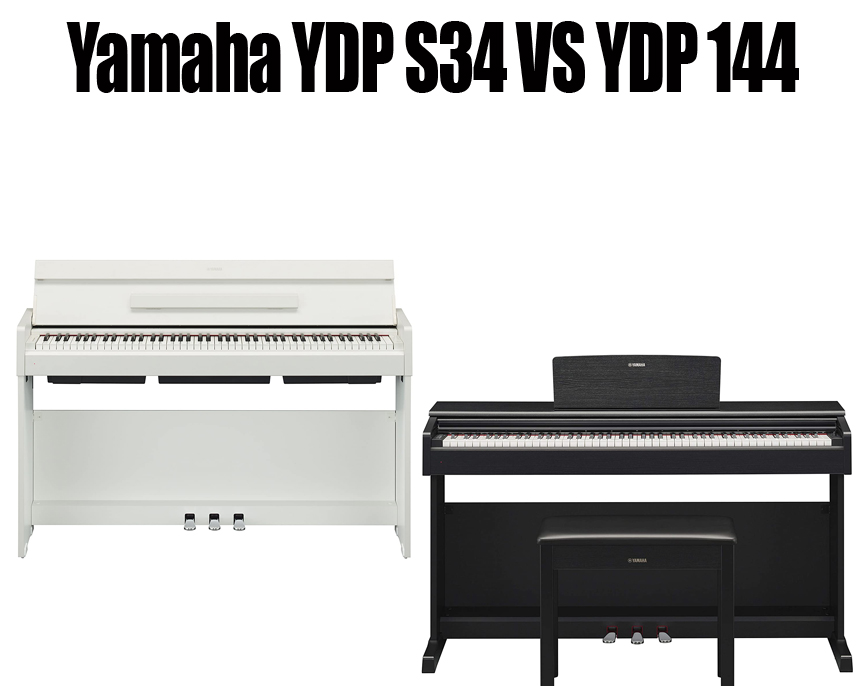 YDP-144 vs. YDP-S34: With almost the same technical features, the YDP-S34 is ideal when there is only very little space for a digital piano. The YDP-144 is also designed slim, but the YDP-S34 is actually even more compact than the YDP-144. Another difference: The loudspeakers of the YDP-S34 are mounted in plastic housings below the gaming table, while the YDP-144 has them integrated into the housing, which also results in slight nuances in sound between these two models. Here it is also worth taking a look at the price difference, which can vary in the online shops.

Conclusion: a lot of digital piano for the money As a small home piano, the Yamaha Arius YDP-144 may seem a bit inconspicuous. Overall, however, you get a lot on offer here. First of all, the sound and keyboard are convincing in this price range. Even if the loudspeaker system cannot reproduce the piano sound in full dimensions – completely understandable given the size of the instrument – the great quality is all the more surprising when good headphones are used.

Then the Yamaha YDP-144 has a wide range of digital piano functions, and the USB integration of tablets, smartphones, or music computers is great. All in all a valuable little digital piano for beginners.