With the successor to its PX-160 model, Casio has made a bold design decision: With its slim appearance, the Casio PX-S1000 lives up to the genre of portable pianos, but it also continues to develop proven qualities.

The Casio PX-S1000 is optionally available in black or white and looks really chic with its glossy surface finish. The control panel is noticeably different: The power button and the volume control are the only conventional control elements, the rest is done using seven illuminated touches “buttons”.

All of this underlines the slim look and contributes to a stylish overall impression of the portable piano – which, incidentally, also recently won the “Red Dot Award” design competition. The Casio PX-S1000 won the coveted award in the “Product Design” category.

As usual with portable pianos, Casio offers an optional stand in a matching design (CS-68) and a triple pedal unit (SP-34) for the PX-S1000. The PX thus functions as an inexpensive home piano alternative. The SC-800P transport bag is optionally available for mobile use and can also be used as a backpack thanks to the carrying straps. The Casio PX-S1000 can be supplied with power via the external power supply unit (included) or via six AA batteries. 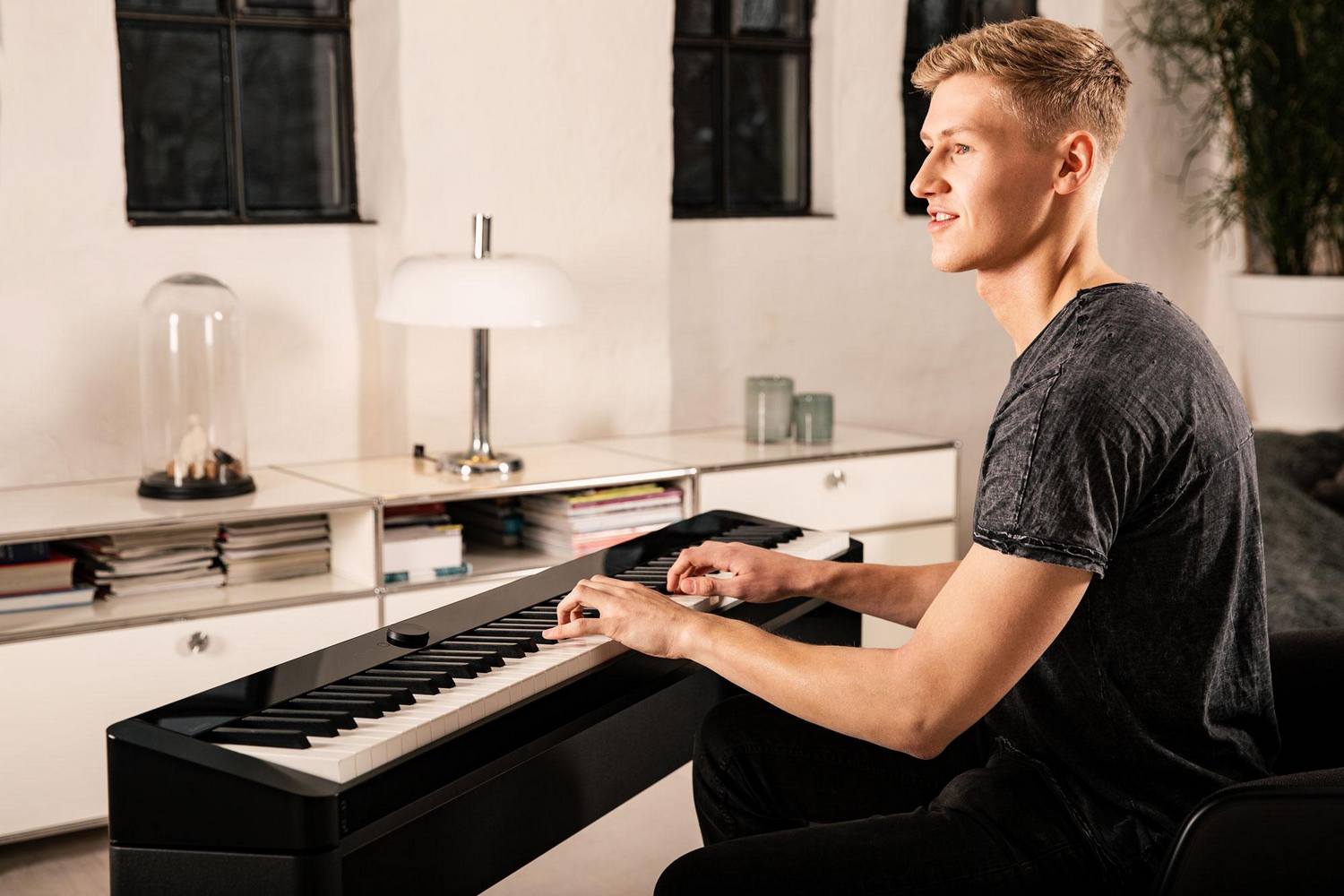 Darling, they shrunk the keyboard

Casio has developed a completely new keyboard for the PX-S1000. The mechanics are lighter and about 20% smaller than the previous models. Nevertheless, it is a full-fledged hammer action keyboard with graduated weighting and an improved ivory surface. In this compact entry-level class, this keyboard is one of the best.

The scaled hammer mechanics with heavier key weights in the bass and lighter ones in the treble contribute to a decent piano playing experience. The repetition is quite good and the roughened key-tops provide grip. With five dynamic curves, the player can adjust the touch sensitivity to his taste.

Sound qualities of the Privia PX-S1000

As in the previous model, there are again 18 sounds in the S1000 with a focus on the acoustic and electric pianos as well as organs. The polyphony is lush with 192 voices for a model in the price range under 1000 dollars. Also available in this price range, Casio also offers the larger model PX-S3000, which has significantly more sounds as well as extended equipment with automatic accompaniment and editable effects, etc.

The built-in speakers provide 2 x 8 watts and sound pleasantly powerful and low-noise. They radiate both to the rear and to the front through openings in the housing. A new virtual surround effect can also be added. Depending on the installation position, the sound impression varies a bit, of course, but the perceived broadening of the sound ensures the nice plasticity of the loudspeaker signal. The effect only affects the loudspeaker sound – the line output and the headphone signal remain unaffected.

The piano sounds with subtleties

Three main concert grand sounds are variations of the same multisample from “natural and muted” to “open and assertive”. The well-known Casio clean and balanced sound across the entire range of the keyboard is known, the dynamics are well implemented.   Compared to its predecessor, the manufacturer has upgraded the string and damper resonances as well as the simulated mechanical noises of a grand piano in the S1000.

Five of these parameters can each be set in four intensity levels or switched off completely so that you can tune the grand piano sound to your own preferences – not to forget the equally valuable brilliance control. Overall, a flexible and expressive grand piano sound that radiates a little more luster and authenticity than that of the previous model.

Electric pianos and other sounds

In addition to two other good acoustic pianos for rock and jazz, there are the vintage classics Fender Rhodes and Wurlitzer on electric pianos. But also the FM pianos with their crystalline sound – typical of the pop music of the 80s – are fun.

In addition: four organs including a church organ and Hammond, two string ensembles, vibraphone, and harpsichord as well as a double bass, all satisfactory to good. The bass can again be used exclusively as the – only – split sound. All other sounds can be freely layered, the volumes for lower and upper sounds are adjustable. Reverb and a chorus effect, each with four types, can be switched on.

The operation has been redesigned a little compared to the PX-160. The main sounds of the categories “Grand Piano” and “Electric Piano” are directly accessible. Likewise the integrated metronome, the song player, or recorder. Most other functions require keyboard shortcuts.

For example: Using “Sound Mode” plus C2 or C # 2, the seven-level brilliance is increased or decreased. With “Function” plus D5 to G5, keyboard sound, MIDI, and audio song volumes are adjusted. And also the “Grand Piano” and “Elec. Piano ” are held down when you want to select one of the other sounds as Upper 1 or Upper 2 (in the layer) using an additional piano key. If you really want to use all of the parameters offered, you should definitely consult the “Keyboard Functions List” provided.

60 integrated MIDI songs, especially classical piano pieces, in which the voices of the right and left hands can be separated – this is also known from the PX-160. The PX-S1000 also has an integrated two-track MIDI recorder with storage space for 10 songs. In addition, the “Duet” function intended for student-teacher exercises, which divides the keyboard into two independent areas.

And there is also the global memory function known from its predecessor for all individually made settings. However, the Portable Piano does not offer real registration memories. The latter can be found in the big brother PX-S3000, where they can no longer be dispensed with: This more expensive model offers 700 sounds, automatic accompaniment with 200 styles, and an audio recorder function.

Playbacks via the Casio PX-S1000

A new feature is the ability to play audio material via the S1000 speakers or the headphone sockets – either via the audio input or via Bluetooth. Even a “Center Cancel” function for suppressing the melody voice, which the player can then take over, has been thought of. And the amount of reverb effect for audio songs can also be adjusted.

Another new feature is the support of Casio’s free app “Chordana Play for Piano” for iOS and Android. The app is compatible with all current Casio digital pianos, including the PX-S1000. With a tablet on which this software is installed, many operating steps work much more conveniently than on the S1000 itself using the remote function. In addition, the notation display for the integrated MIDI songs, a MIDI, and an audio player are offered in the app itself.

At first glance, the two Privia models look like twins. Don’t get me wrong, they are very similar both pianos have an almost identical footprint, both are electronic pianos with 88 hammer keys, both offer Bluetooth connectivity, both offer Bluetooth support for the Chordana app, et cetera and so on continue. But there’s a good reason the PX-S3000 is priced higher it’s packed with features. The S1000 is by no means sloppy, but the S3000 is a true Swiss Army knife for an advanced pianist.

While the Privia PX-S1000 offers a respectable 18 tones, which is a common sound range for most digital pianos in its weight class, the S3000 offers an absolutely breathtaking 700 tones. That’s not a typo, I promise. The S3000 offers almost 40 times the number of tones compared to its little brother in the Privia range, and the boasting doesn’t stop there.

The PX-S3000 offers song and audio recording and playback with a track capacity of approximately 30,000 notes. It has a pitch bend wheel, music presets, auto harmonization, an incredibly robust arpeggiator, the list goes on.

Honestly, if you’re reading these features with a confused look or wondering what they would do for you, then honestly you probably don’t need them!

If you’re not a fan of all the extra bells and whistles, the S1000 is still a fantastic buy but if you dig a little more.

Dimensions aren’t everything, but when looking for a portable piano it is important to consider these.

And while we’re talking about portability, the P-125 weighs a few pounds more than the Privia which weighs just under 25 pounds, and the FP-30 weighs a whopping 31 pounds.

And that’s not the worst for the added weight and bulk of the two main competitors, they still don’t significantly outperform the Privia.

Both have smaller speakers that don’t deliver as much sound, and their speaker amplifiers are also weaker so they’ll fall short in both quality and quantity of sound.

The FP-30 doesn’t have the Casio’s polyphony, and the Yamaha P-125 has half the touch sensitivity. What really seals me personally is that none of the competing models can run on battery power.

And the last nail in the coffin is the price. There’s an obvious reason for a piano with fewer features, weaker speakers, etc. if you’re a pianist on a budget.

Not everyone can afford the piano that is the best on the market, and that’s understandable. After you’ve set the price ranges for the three models, almost all major retailers sell them at the same price. If you can use the FP-30 or the P-125, you can buy the S1000. And honestly, there’s no reason not to buy the Casio S1000.

Conclusion: Small piano with a lot of power

The new Casio also likes the extremely compact design and extensive equipment. In addition to important standard functions such as practice songs and a MIDI recorder, the super-slim portable piano also offers Bluetooth audio, app-controlled operation, and flexible sound tuning for its A pianos. With a new design, Casio is also bringing a classy look to the entry-level price segment. A convincing performance.